Ken started writing songs in the Sixties. When he went on the road, hitchhiking and riding freights from Montreal to San Francisco, he brought his guitar. Over the years, he performed sporadically at coffee shops in Montreal, Haight-Ashbury, Vancouver, and Calgary. In the Nineties, after fronting a house band in Calgary for a couple of years, he formed a trio with pianist Frank “Freeman” Huether and percussionist Fred Engle. While performing around town as Ken McGoogan and the Immoral Minority, he wrote the Greatest Hits featured here. You can see the lyrics by clicking on the + sign. And bonus with Tell Tale Heart, the last song in the list: You can hear the audio version OR catch a video rendition.

March of the Boomers

Chorus:
Oh we chanted our slogans and sang our songs
Swore that forever we’d go marching on
We would always right what was wrong
We’re Baby Boomers

Into the 70s, still running well
We spoke for the weak told the strong, Ring a bell,
Invented Women’s Liberation and of course
Called it a mere bagatelle

Now in the 90s we see a gleam
Of light at the end of the tunnel of dreams
We keep running, catch a second wind
Cry, we’ve our history to redeem

When I woke up this morning
The ghost of Robert Johnson sat drinking coffee at my desk
I said oh, Mr. Johnson, oh please, Mr. Johnson
You know that I do my best
But at times the Blues disturb me
And I can’t get my beauty rest

It was only infatuation
So you say and you want to believe
Fine by me. But I know better.
Don’t say goodbye, walk away, just leave.

Say I’m dreaming, say I’m crazy,
Say that you never thought of me
In your eyes I see reflected
A truth that wasn’t ever meant to be (repeat)

I read a book last Friday for the first time in 17 years
Now I don’t mean I perused the whole thing,
cause certain words pollute the atmosphere
On every second page I found profanity
In the mouth of this here penniless bum
Who was cussing and swearing and taking in vain
The names of the father and son

The List of Nobel winners who live far away
It goes on and on and on: Garcia Marquez,
Canetti, Soyinka, in God’s Country they are going, going, gone
And we will not neglect to rid our own back yard
Of smut and filth and sacrilegious ink
Mitchell and Atwood, Richler and Laurence,
You can count on us not to blink

We’ll hunt down uppity writers and we won’t stop there
We’ll round up those who buy their books
We’ll stamp out reading in God’s Country
Except for what’s okayed by us
We’ll take these lowlife bookworms and those creeps and bums
The poor, the sick, the halt and the lame
We’ll take kids who crave a broad education
And ship the lot back whence they came

I was working on a mountaintop as a fire lookout in the Rockies
I sat basking in the sun, rereading On the Road
That is where one afternoon something happened that shocked me
A man turned up and did declare, hey, I wrote that tome

Chorus:
I said oh, what do you know, who do you think you’re fooling?
I said hey, Jack, haven’t you heard? Kerouac is dead and gone

He said yes, dead and gone, but I am not forgotten
I have come to find someone to witness my self-restraint
He said, In my life I made mistakes with drink and drugs and women
Even so I’m on the road to be a Great Walking Saint

He said in my lifetime I did work three bonafide miracles
Finally, they were just enough to make them beautify me
In the Perfect One World Church of Yesterday’s Tomorrow
In death I must work one more to be a Great Walking Saint

Chorus
I said oh, wouldn’t you know, turns out he was not kidding
I said hey Jack, wait for me, Kerouac he lives on

[This song draws on Kerouac’s Ghost]

Once upon a magic, mild and misty morning
I did spy a pirate ship sailing for our island
So I called to Friday and said what do you think?
I fear if we stay here, we will surely die
For if we do say hi, they will murder us
As pirates are wont to do, Here we will surely die

Friday said Don’t worry, I will find a way to
Signal them that we’re here, alive, well and waiting
To be disabused of innocence and treasure
But then we will trick them, just you wait and see
We’ll defeat them, you and me
We will teach them not to mess with Robinson
Crusoe, Just you wait and see

So we hung a big net from the tallest palm tree
When those dirty pirates came ashore we dropped them
Over their surprised heads, made them yell and holler
They did not think much of swinging in the air
They did curse and they did swear
We took their ship sailed away, looked back and saw them
There, Swinging in the air

Now when I remember the awful way we treated them
I do feel quite badly, though I will survive it
Friday says Don’t worry, just revise the story
Write that we were rescued by a sailing ship
Oh, what an apocalypse
And so to make it real I write it down, insist we were
Saved by a sailing ship

Ken McGoogan · Robinson Crusoe's Confession
I’m Calling Out to You

1/ It was a Friday, I do remember
I’d been working, trying to start a trend
I got home early, what did I find there
But my wife wrapped in the arms of my best friend

2/ Got out my Ouija to consult the spirits
I never do a thing until I know what they think
But when I asked if maybe I should seek revenge
The spirits told me to go see a shrink
Went to the doctor, discussed my story,
Answered his questions about when I was a kid
He did determine under hypnosis
That my problem in a past life it was hid

3/ Under hypnosis, I travelled backwards
All the way back beyond 2000 AD
I found the problem, something I’d eaten
But I got stuck in time and could not get free
I don’t belong here, I am from the future
But you won’t believe no matter what I have to say
My wife is cheating in 2390
With my doctor-friend who sent me here to stay

Warrior, I know that you’re deep within
Hear my drum, hey, we need a Gungha Din
Warrior, to stay away would be a sin
‘Cause the captains of industry have taken
Every chief stronghold
The last night has fallen, terrible, dark, and cold

Sorcerer, I have come to conjure you
Prophecy says you know a trick or two
Sorcerer, don’t you hear the ballyhoo
‘Cause the money-lenders have white magic
In a stranglehold
The last night has fallen, terrible, dark, and cold

Interlude:
Entering stage left, the lover sings a song
Debtors tie him down and treat him cruelly wrong
He finds out where they dwell, steals their book of magic spells
And makes them sing along

Oh my king, we call on you to intercede
Majesty, we’re not ready to concede
Oh my king, bring a whip to make them bleed
‘Cause the marketplace is now a temple
Even god is bought and sold
The last night has fallen, terrible, dark, and cold

Warrior, I know that you’re deep within
Hear my drum, hey, we need a Gungha Din
Warrior, to stay away would be a sin
‘Cause the captains of industry have taken
Every chief stronghold
‘Cause the money-lenders have white magic
In a stranglehold
‘Cause the marketplace is now a temple
Even god is bought and sold
The last night has fallen, terrible, dark, and cold

Summer 1966, I do remember lighting out upon the road
Hitching out of Montreal, heading west, free, bound for Mexico
Work-boots on, long black hair, two hundred dollars in my jeans
Meant, hey, I did not have a care

Got to San Francisco, found myself in the Haight-Ashbury
Who needed Mexico, this I knew was where I had to be
Free love in the grass, free rock-and-roll
I chuckled at a highway sign that warned about freedom’s toll

Step into the night, high above stars twinkle
My oldest friend, he confirms that I’m a latter-day Rip Van Winkle

Fell in with some magic people, older than me but maybe not so very wise
Scaled that psychedelic steeple, revelation lay beyond the acid highs
Eighteen years old, took one too many pills
Yesterday I woke up on the wrong side of the hill

Now where is when, time it cracks and crinkles
A voice within whispers I’m a latter-day Rip Van Winkle

Hey it took a little while for Rip to rise on returning from Dreamland
But he dug out an old guitar and put together a knock-em-dead Rock band
Rip Van Winkle arose, cried, What an episode!
He made his flashbacks sing and took them out on the road

How did I get here? Time’s not flat, it’s crinkled
I am delighted to be nothing but a latter-day Rip Van Winkle

When the snow begins to fall
And those Alberta winds do blow
I sing out at how I’m seeing
Winter paint a perfect scene
Hear the mountains, how they call,
Hey, it’s sunny, two below
Hard to describe the joy I’m feeling
Time for my Rocky Mountain Dream

Should we go to Mystic Ridge?
Or to mighty Lake Louise?
Where Paradise means mogul-dancing
Summit Platter makes you scream

Ah but Sunshine gets the snow
Two feet of powder, guaranteed,
See Brewster Rock reach for the blue sky
Time for my Rocky Mountain Dream

Early on I take it slow
Visit Wawa, cruise Birdcage
Then I ride the Great Divide Chair
Oh, what a vista, who’d believe?
See me dance down North Divide
Now I’m slashing through the trees
What’s that noise? Sounds like Yee-haw!
Time for my Rocky Mountain Dream

I fell in love with a young Peggy Sue
Though she went around with a Buddy I knew
The worst of it was I had a tell-tale heart
Whenever I saw her, the drumming would start

I did not know what I would do
If she smiled at me and said, I hear it too
My life became a sad merry go round
The beating of my heart was the only sound around

You’ve heard Buddy’s stories but don’t be deceived
What really happened? What can you believe?
Buddy proposed and Peggy said yes
We went to the wedding, she wore a white dress

She marched down the aisle, my heart it went mad
I shuffled my feet and I felt like a cad
Peggy Sue whispered, oh what’ll we do?
The beating of your heart, yes, I hear it too

Peg and I fled and we did not look back
We married, had kids, and we lived in a shack
Then we won eight million, we live only in art
We dance every night to my tell-tale heart 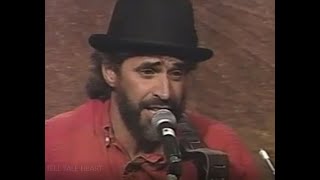