Arctic history buffs around the world are today celebrating what would have been John Rae’s 208th birthday. Born at the Hall of Clestrain in Orkney on September 30, 1813, Rae became a doctor in Edinburgh and then entered the fur trade with the Hudson’s Bay Company. After learning from First Nations and Inuit hunters, he became the foremost overland traveler of the age. Rae discovered both the fate of the 1845 Franklin expedition and the final link in the first navigable Northwest Passage.
In England during the Victorian era, when Charles Dickens and others thought fit to slander the Inuit, Rae emerged as the greatest champion of Canada’s Indigenous peoples. In 1999, I was with the late Louie Kamookak when he led the way to the cairn that Rae built in 1854 overlooking Rae Strait.In Orkney, the John Rae Society is working hard to restore the Hall of Clestrain and turn it into an International Arctic Visitor Centre. Happy birthday, John Rae! And Louie, wish you were here! 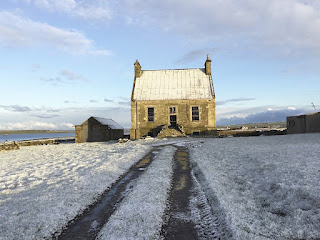